One the way to Rajadamnern Stadium our van got hit by another truck.  It was a very minor scratch but since it was a business vehicle, the driver had to call and wait for insurance to come.  In the meantime, we all piled out of the van and walked around the corner to the little hole in the wall bar.  The neighborhood we were in reminded me a little of Willets Point in Queens, NY, which was the setting for Chop Shop, an excellent movie if you haven't seen it. 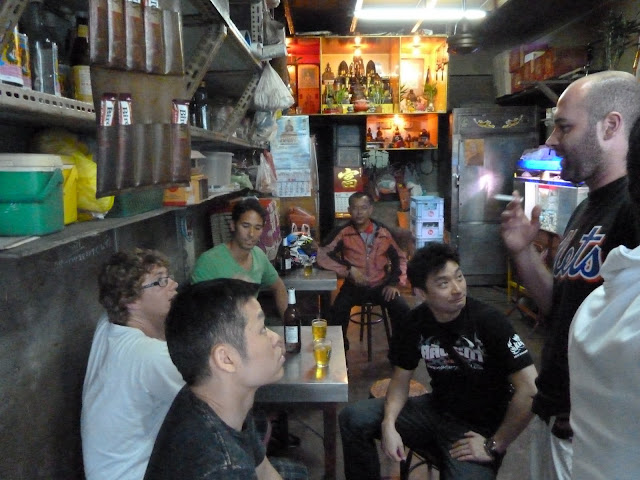 After drinking a round, we decided to just take a cab to the stadium instead of waiting on the insurance.  Dinner was at Likit Restaurant right around the corner from the stadium.  We ate family style; the dishes including chicken, pork neck, a seafood, a catfish dish, Bamboo Shoots, Papaya Salad, and my personal favorite, sticky rice.  Sticky rice is exactly what is sounds like, but the stickiness gives it a textures that sets it apart from other rices.  I ate two baskets full of it, and my fighting name jokingly became Sticky Rice. 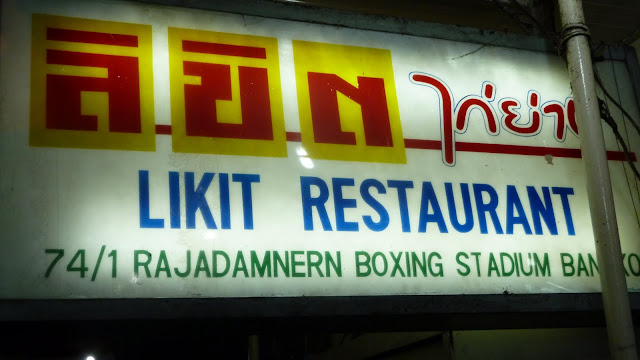 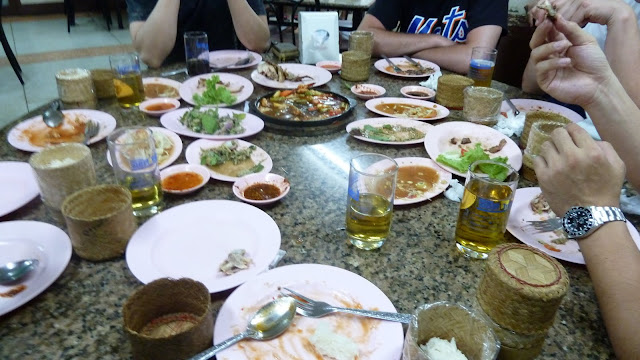 After Dinner we headed to Rajadamnern stadium.  The weeknight shows are generally don't have as high profile of fights as the weekend, so the crowd was small.  Even so, it was still extremely loud in the stadium due to all the gamblers.  Betting at Thai boxing matches is something very akin to the stock market floor.  Its a bunch of guys yelling and flashing hand signs, and there is no way of knowing what the hell is going on.  They don't just bet on the outcome of the fight either, they'll bet on things like how many knees a fighter will throw in the round or how many times a fighter will get dumped.  The gamblers will even try to communicate with the corners to tell the fighters what to do.  It's insane.

This morning we are heading to Wat Po, the Temple of the Reclining Buddha.  From there we'll eat lunch at a local market and then head to Sitsongpeenong for an afternoon training session.
Posted by Doug at 9:27 PM