I haven't made it to Thailand yet, but I've made it to Tokyo.  I've got about 7 hours to kill here at Narita airport before my flight leaves for Bangkok.  Here's 10 things I've learned from my first international flight:

2) The plane smells like moth balls and farts for the majority of that 13 hours.  bummer.

3) When the pilot says they'll be serving brunch, he means a granola bar.

4) Got a boxed ham sandwich and nothing else about halfway through the flight. I ate it since I was starving.

5) When they finally gave us a real meal 11.5 hours into the flight, I opted for cheese pizza. It was surprisingly good.  Came with three bites of pineapple, one strawberry and 2 milano cookies.

6) Contrary to what I originally thought, I actually flew west from NY to Tokyo crossing the International Date Line and essentially losing a day.

7) My ass hurts more than anything.

8) The Japanese have a coin with a hole in the middle.  Its the 5 yen.   They also have a single coin worth 500yen (which will hardly buy you a large coffee).

9) The Japanese are super friendly and smile a lot (at least the ones at the airport). I dig it.

10) Japan Airlines > American Airlines.  While checking in at American, I waited in line for about 30 minutes after checking in at the self service kiosk as they were understaffed.  The lady at the counter then can't find my baggage ticket and asks me if I'm sure I'm going to Bangkok as she doesn't see a Bangkok ticket.  Uh yeah, I'm pretty sure.  She goes over to the other computer to look, and then asks me to start looking through the pile at her desk.  So I reach across the counter and eventually find it myself.  At the Japan Airline counter, there was no line and the lady checked me in literally in 30 seconds.  She then thanked me for waiting. No Problem.

Alright, I'm going to go walk around a bit to give my butt a rest before my 5 hour flight to Bangkok.  I'll include the only picture I got today as we were flying out of RDU.  I should have taken some pics of the awesome glaciers I got to see while over Alaska. Oh well. 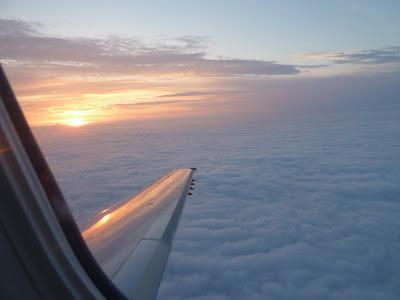