Yesterday was Sunday, which is rest day for most gyms, although Fighting Spirit does have a Sunday afternoon training. I decided not to train, and just did some exploring after watching the Channel 7 Muay Thai fights on TV. The main event featured Jomhod Eminent Air vs. Chiabkom Sitjagun. It is definitely worth watching as Jomhod put on a technical performance and used some great boxing all while smiling the whole fight.


As I was walking around exploring the Sathorn area of Bangkok, I scouted out one gym that I knew the street of and actually stumbled upon another that I wasn't looking for. I may try to get in a morning session at each of them this week.

The gym that I've decided to spend most of my time training at this week is 96 Penang. 96 Peneng is located underneath a highway overpass in the Klong Toei slums of Bangkok. It is only about 2km from where I am staying, so I walked the first km to the intersection of Rama IV road and Sunthorn Kosa Rd. I could have walked the whole way, but I didn't really know where it was and I heard the motorbike taxi drivers would know (the gym has no address as it is not on a road but under a bridge). So I stopped at the nearest motorbike taxi stand and using my perfect Thai said "kai muay gaao-sip-hok Penang." The guys all start shadow boxing, so I figure they must know where it's at, perfect. I get on the appointed motorbike, the driver goes about 50 feet, and stops to ask a songthaew driver for directions. He must have gotten it because soon we speed off. Nope. At the next stoplight he starts asking the guy on the motorbike next to us for directions. Why did he agree to take me somewhere that he didn't even know where it was? I guess he didn't want to lose the 20 baht (65 cents) I was going to pay him. Well the directions he got were good enough, and soon I recognized where to go from pictures I'd seen on the internet.

Despite being in the slums, the training I got here was some of the best I've had in Thailand. I was seriously impressed with the amount of effort and attention that the two trainers put in to me and correcting my technique seeing as it was only my first time there. Training consisted of Jumping rope, shadow boxing, pad rounds, and bag rounds. They don't have a round timer, but I think I got 2 x 10 minute rounds with one trainer and 1 x 5 minute round with Kaisuvit, the head trainer. No matter what I was doing (shadow, pads, bag) they would keep an eye on me and correct anything they saw wrong in my technique. Tomorrow I'll probably get some clinch work in as well; today I think they just wanted to see where I was at skill wise before sending me to clinch which they do first thing.

Here's the only picture I took of the gym. I'll get more this week and maybe some videos. I didn't want to look like a gym tourist taking a million pictures on my first time there. 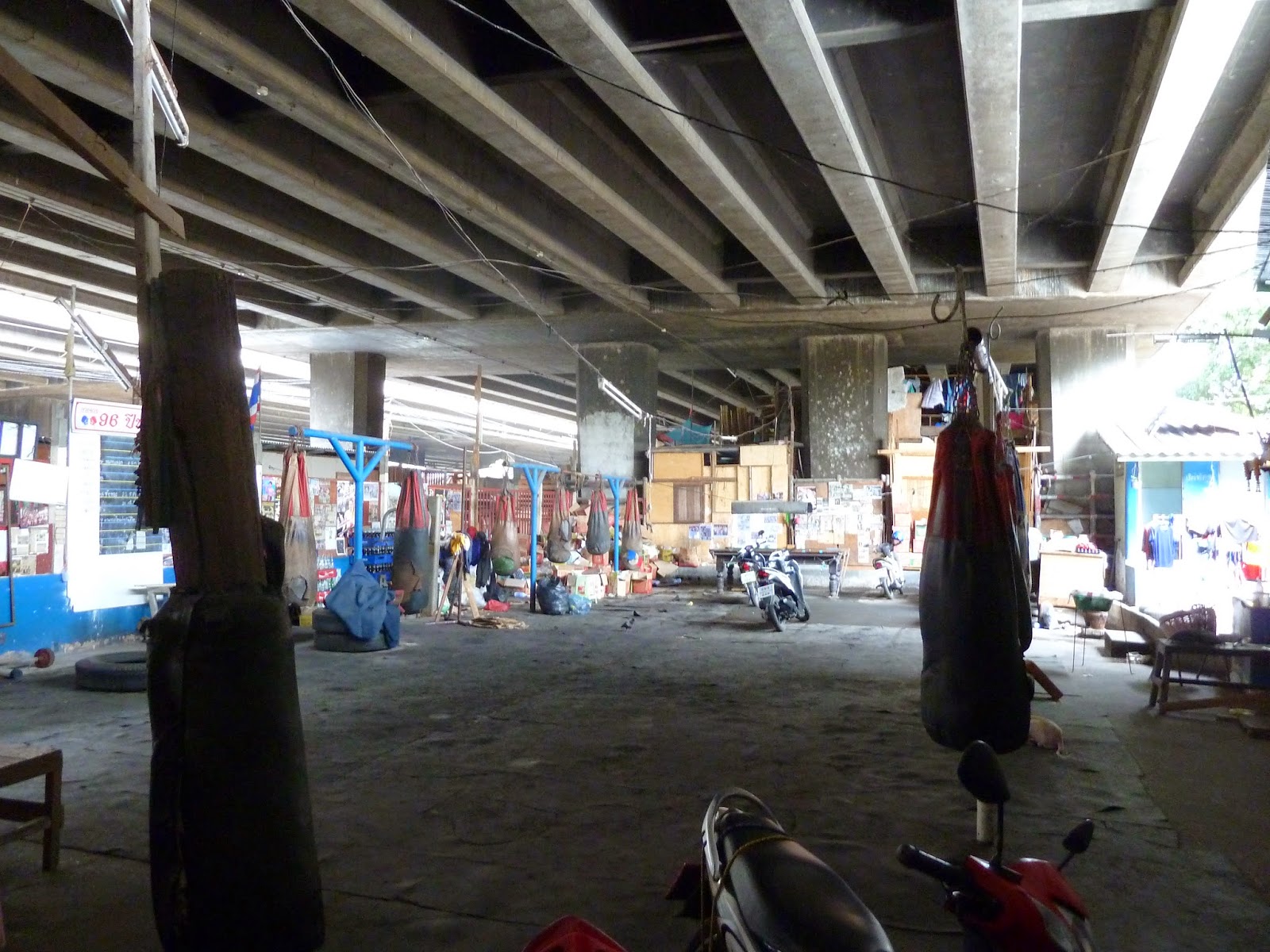 After training I walked the 2km back to the hotel, it was a nice cool down. After showering I went out to get dinner and had my favorite Thai meal, Ko Moo Yang (grilled pork neck) with nam jim jaew (dried chili dipping sauce), khao niao (sticky rice), and fresh raw vegetables. I need to find some Isaan street food in this neighborhood though so I don't have to pay 170 baht (~$5) for this meal at a restaurant. I'll work on that tomorrow. 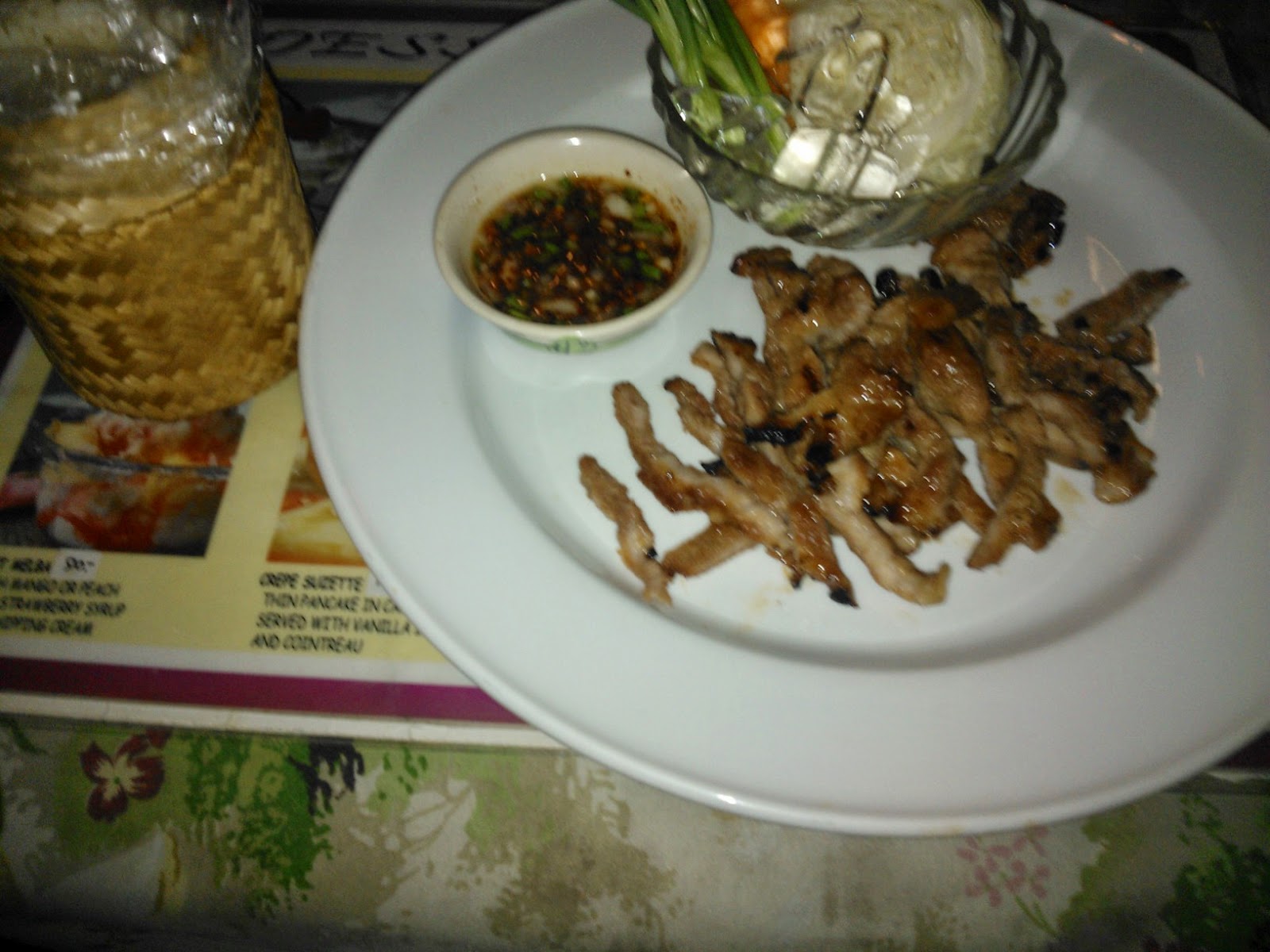 The rest of the plan for tomorrow is to get up at 6am and run about 10km in Lumphini Park, rest and then head to 96 Penang for afternoon training (they only train in the afternoon, just running in the am).
Posted by Doug at 10:47 AM