Headfirst Back Into Bangkok

Sadly we left Rawai today. Linda returned to the gym yesterday from Kata for a couple training sessions before we both flew back to Bangkok. Nongnapat gym turned out to be a great choice for training. Much like Sitmonchai, I really felt a part of the family, and that they would have done anything to accommodate me while I was there. I also got some great training, worked hard, and put in 11 training sessions over the course of 6 days (I've got over 30 minutes of video footage to edit when I get to Raleigh as well).
The gym manager, Cha Cha, was kind enough to motorbike us around Phuket the last couple days as well. Taking three grown adults on one underpowered 120cc motorbike onto the roads of Thailand is quite the experience. We precariously scooted around taking in some last minute sights including the Fightlab shop, Nai Harn Beach, and Promthep Cape (again for me).

Flying Bangkok Airways is always a nice treat. They have a Boutique Lounge for all customers, even the lowly economy class scrubs like me and not just business travelers who rack up a million frequent flyer miles on corporate dime. The one at Phuket airport had free wifi, coffee, juice, pizza snacks, almond muffins, pineapple danishes, and more. Linda and I pretty much had the place to ourselves for like an hour. All this plus a full in flight meal for a ticket that cost less than $100 round trip. Why can't US airlines provide this level of service?
After arriving in Bangkok, the only logical way to overcome the depression of leaving Rawai and our new friends at Nongnapat was to hit up Soi Cowboy. No buddhist holiday this time meant that it was on. I'm not sure if this is a family friendly blog or not, but I'll just say we had a couple beers at Toy Bar and The Dollhouse and leave it with this picture of the soi: 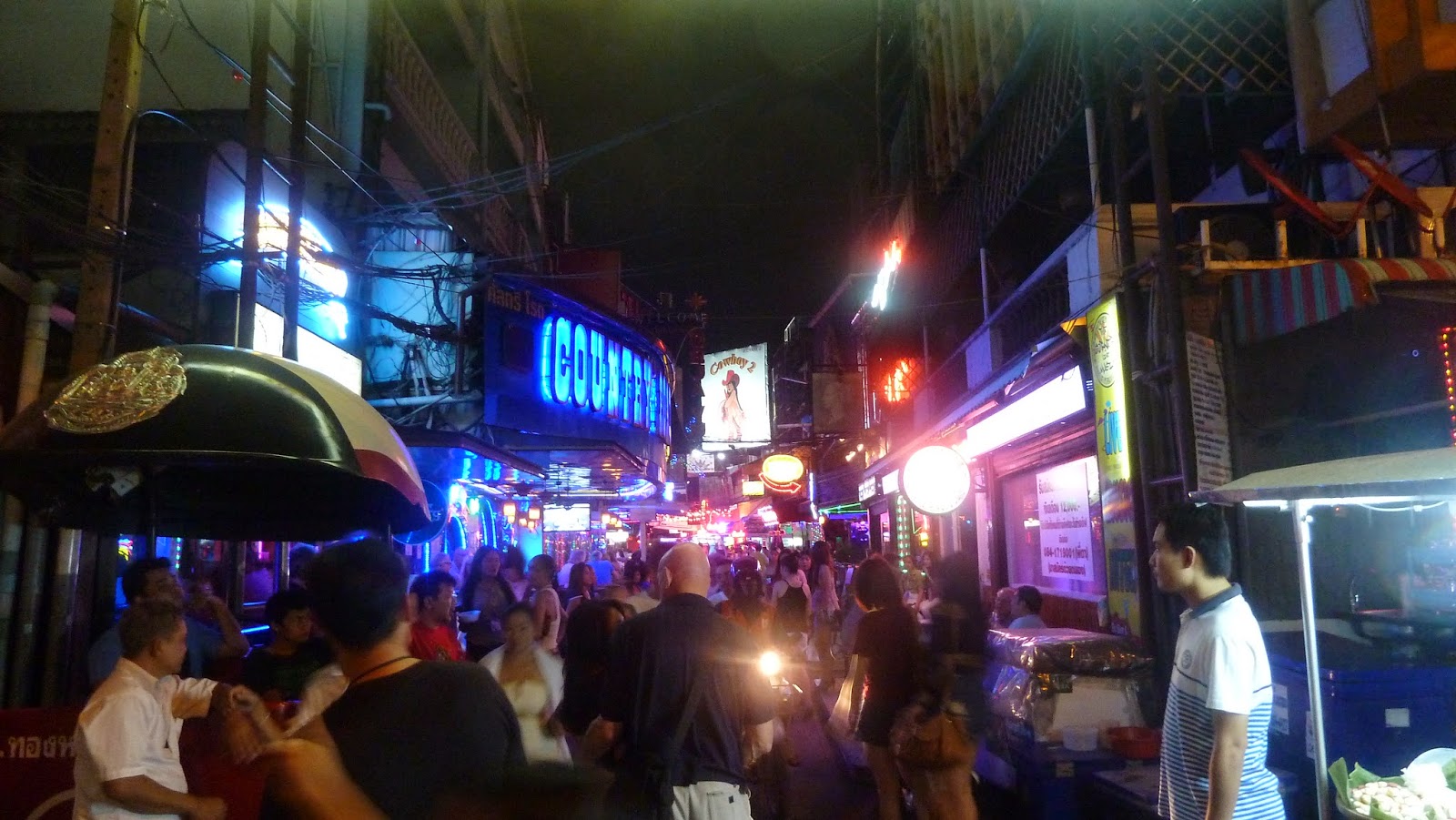 After literally getting dragged into some other bar by the girls outside and refusing to buy 200 baht beers, we decided it was time to leave. I was reeling from a bit of sensory overload. Linda however was ready to dive full into Bangkok street life, so we headed out in search of some street food which she had been avoiding for the last couple weeks for fear of getting sick. First up was a pad see ew vendor. She stir fried it up fresh for us right there and we promptly devoured it on the spot. Linda then wanted to find some rambutan fruit, but the late night fruit scene was not very happening. We settled for some ko moo yang (grilled pork neck) at the end of the soi that our hotel is on, and it was amazing.


A good first night back in Bangkok. Tomorrow is shopping and hopefully catching some live Muay Thai at Rajadamnern Stadium.
Posted by Doug at 1:01 PM